Security is about tradeoffs

When I was working on this site on of the first things I did after setting up SSL was to run the Qualys SSL Labs Test on my site. This tool will analyze your site security and point out any weaknesses and assign a grade to your site. I initially scored a C and used the test results to get this site up to an A. When I got to an A I thought I was doing well as I had robust forward secrecy and my scores 100, 95, 80, 90. Then I saw this blog post over here and noticed his site while also had an A score he had a key exchange score of 100. This sent me down the rabbit hole of tweaking SSL configs to figure out how to really get a high score on this test.

After hours of testing I determined the difference was disabling the kEDH Ciphers which are “cipher suites using ephemeral DH key agreement, including anonymous cipher suites.” Once those are disabled my key exchange score went up to 100, however I lost my robust forward secrecy rating. There is the tradeoff if you drop those ciphers there are a bunch of devices out there that can’t do forward secrecy anymore, but if you keep them you are using what are considered to be weaker ciphers. In the end I decided to drop them, and then since I was in there I continued tweaking to one up Christopher Burg and got my site all the way up to an A+ before his. Who says a little friendly competition isn’t good motivation.

For anyone who is curious I looked into what it would take to get all 100s on the test and it is a price I am unwilling to pay at this time. Basically you have to run only TLS1.2 and have things really locked down. The other thing I would like to figure out is are the Camellia ciphers good and considered secure? I saw some sites recommending them, but I haven’t really heard much about them. I would love to know what the security community thinks of them, whether they are considered secure or efficient. I considered testing with them, against the Qualys SSL report card but it was midnight when I finally got to my A+ so I just left things where they were. If you want to check out my score on the test go here. Also check out this lovely image of my report card: 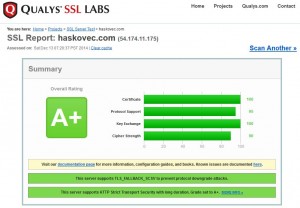